I received my Ph.D from the Institute for Prevention of Cardiovascular Diseases, Ludwig Maximilian University, Munich in Germany and completed postdoc from the same Institute.

Cofilin forms oligomers in vivo
ADF/Cofilin proteins are key regulators of actin dynamics. Their function is inhibited by LIMK-mediated phosphorylation

Protein phosphorylation cycle is the key event of cell signaling pathways in eukaryotic cells and regulates all cellular functions including cell migration, secretion, apoptosis and differentiation. Protein kinases that phosphorylate signaling proteins on serine/threonine (Ser/Thr) or tyrosine (Tyr) residues are the largest super family of enzymes comprising 1.7% of all human genes. Dysregulation of protein kinases play crucial roles in human diseases and agonists or antagonists of these enzymes are the major interest as therapeutic intervention points.

STK35 kinases are members of the New Kinase Family 4 (NK4) of Ser/Thr kinases (STK) family and classified in the group ‘other’ in the human kinome. My lab has characterized the locus of STK35 gene using bioinformatics and found that the previously published coding sequence of the Ser/Thr kinase STK35 gene is incomplete. The newly identified STK35 gene encodes for a protein of 534 amino acids. Hence I termed this protein as STK35L1 (STK35 Long). 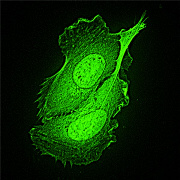 We identified a bipartite nuclear localization signal (aa142-153), and nucleolar localization sequences in the N-terminal part (aa1-133) of STK35L1 and a role in G1 to S phase of cell cycle progression. Cell cycle specific genes array analysis revealed that CDKN2A (p16INK4a) was prominently downregulated in STK35L1 silenced cells: alpha transcript, which codes for leading to G1 arrest by inhibition of CDK4/6. Silencing of STK35L1 drastically inhibited endothelial sprouting that is required for angiogenesis cell migration. We hypothesize that STK35L1 is a central kinase integrating migration and cell cycle regulation by modifying key genes expression through the action on the nuclear cytoskeleton (nuclear actin and actin-associated proteins). The biological function of STK35L1 is not known.STK35L1 gene expression was found to be upregulated in colorectal cancer and was altered in a rodent model of Parkinson disease. A kinome-wide RNAi screen revealed that STK35L1 silencing was among top five hits leading to reduce infection of hepatocytes by Plasmodium berghei sporozoites. These studies suggest that STK35L1 may play a role in various human diseases.

The aim of the project is to understand the regulation and function of STK35L1 in vascular development and diseases like malaria. The objectives of the projects are to clarify the molecular mechanism, how STK35L1 regulates the cell cycle and migration in endothelial cells, and to characterize the signaling pathways that regulate STK35L1 protein.