I received my Ph.D from the Institute for Prevention of Cardiovascular Diseases, Ludwig Maximilian University, Munich in Germany and completed postdoc from the same Institute.

Cofilin forms oligomers in vivo
ADF/Cofilin proteins are key regulators of actin dynamics. Their function is inhibited by LIMK-mediated phosphorylation

Actin is not only present in the cytosol but also in the nucleus. G-actin enters the nucleus in a complex with cofilin, which contains a nuclear localization signal. Actin has been reported to be present in different subnuclear compartments such as the nucleolus and Cajal bodies. Actin may be involved in diverse nuclear activities including transcription, chromatin remodeling and nucleocytoplasmic trafficking.

The LIMK family kinases possess characteristic structural features, consisting of N-terminal two LIM domains, a PDZ domain and a C-terminal kinase domain. LIMK1 and LIMK2 are phosphorylated at Thr508 and Thr505, respectively by Rho-kinase or PAKs thereby activating the enzyme. LIMK1 is also phosphorylated by MAPK, MRCKα and mitosis specific kinase cdk1. Inflammatory stimuli such as IL-1β and TNF-α upregulated the cofilin and LIMK2 in cultured pulmonary artery smooth muscle cells. LIMK1 and cofilin also interact with the 14-3-3ζ adaptor protein. We discovered that LIMK2 shuttles between the nucleus and the cytoplasm of endothelial cells, and that the nuclear import of LIMK2 is inhibited by PKC-dependent phosphorylation at Ser-283 and probably together with Thr-494. We have also shown that LIMK2 has a unique nuclear and nucleolar localization signals. 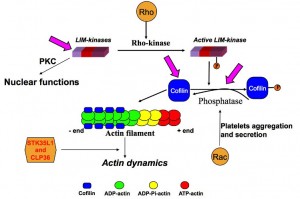 Cofilin, an actin dynamizing protein favors depolymerisation or polymerization of actin depending on the cellular content of actin filaments and free barbed ends relative to actin monomers. The action of cofilin depends on its local concentration: low concentrations favor severing, whereas high concentrations favor nucleation. Cofilin activity is negatively regulated by LIM kinases via phosphorylation at Ser-3 whereas dephosphorylation by slingshot or chronophin activates cofilin. Cofilin possesses an intrinsic tendency to form oligomers in vitro and that in contrast to the monomer, cofilin oligomers induce actin polymerization and filament bundling. Cofilin shuttles between the nucleus and the cytoplasm. cofilin-actin rods were observed in various cell types under cellular stress, such as after DMSO treatment or ATP depletion. Cofilin–actin rods are thought to be transiently neuroprotective in cellular models, but improper formation and clearance is thought to be neurotoxic in models of Alzheimer’s and Huntington’s disease. Phospho-regulation of cofilin is a key event of actin dynamics and plays a crucial role in diseases such as cancer metastasis, neurological diseases and cardiovascular disorders. 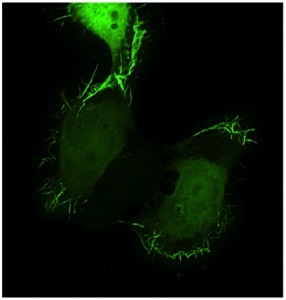 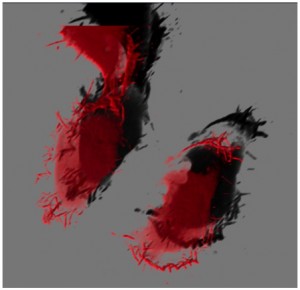